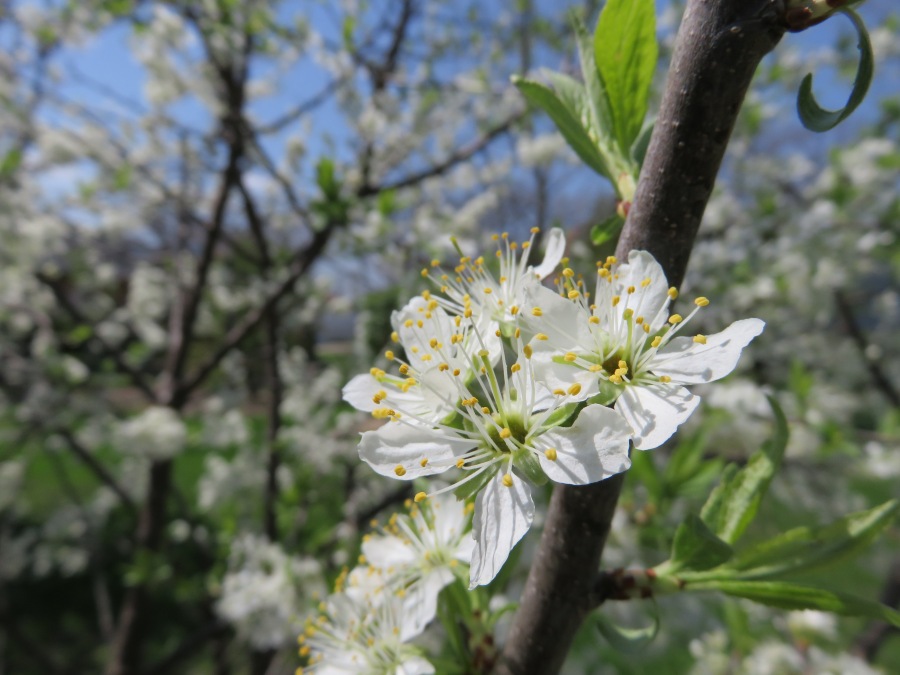 There is so much going on in the garden now it is impossible to capture it all.  Here are a few things that caught my attention this week, as spring enters the Chicago area with gusto. 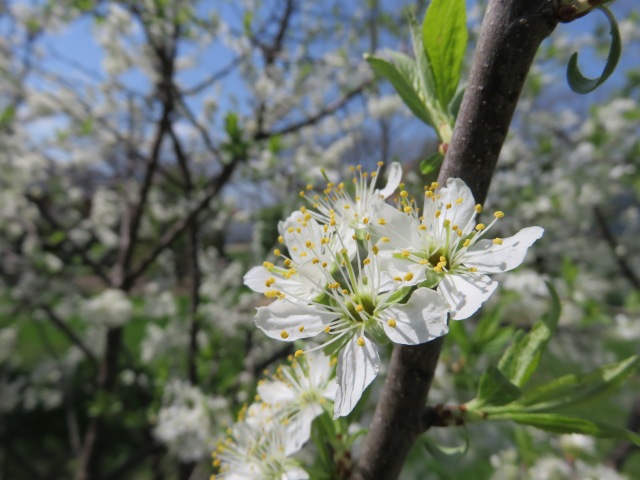 The two American plum trees, native trees, have put on a fantastic fragrant show this week in the yard. 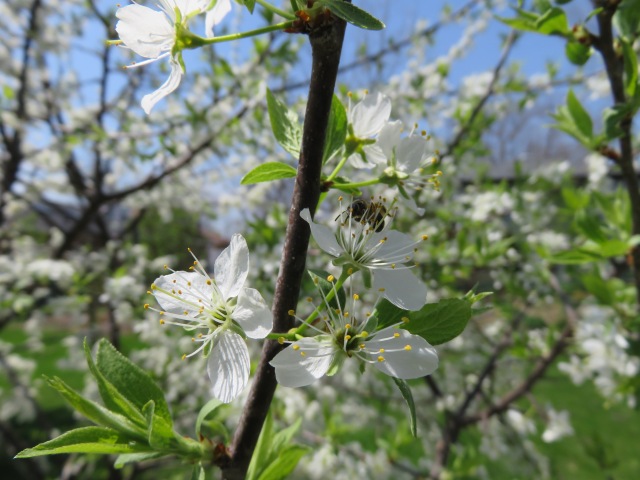 All kinds of tiny pollinators swarmed to the blossoms.

We had quite a few plums develop last summer.  The skin was sour, but the inside flesh was very good.  There are many suckers growing around the base of the trees that need to be cut back or they would form a thicket.

I noticed a spider making a web between the plums trees and the yew bushes nearby, hoping to snag some of the pollinators.

Looking out the kitchen window we can just see the plum trees between the crab apple tree, that is just starting to bloom now, and the yew shrubs.  The yews have formed a nice privacy area in front of the patio. 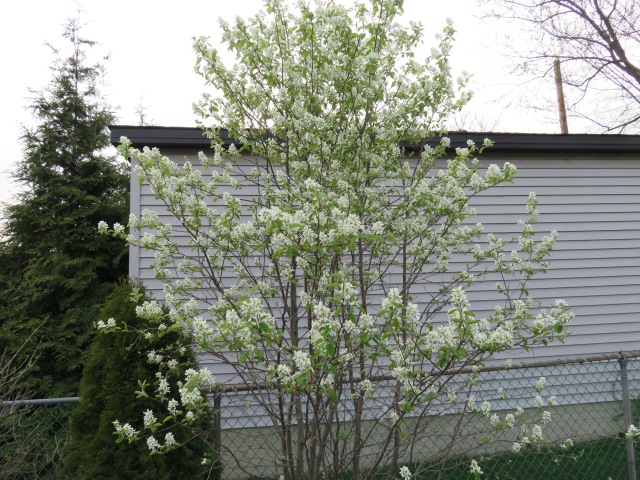 The serviceberry Amlanchier laevis finished blooming last week.  Now that it is taller it is a little harder to reach the berries in June, but the birds have no trouble with that. 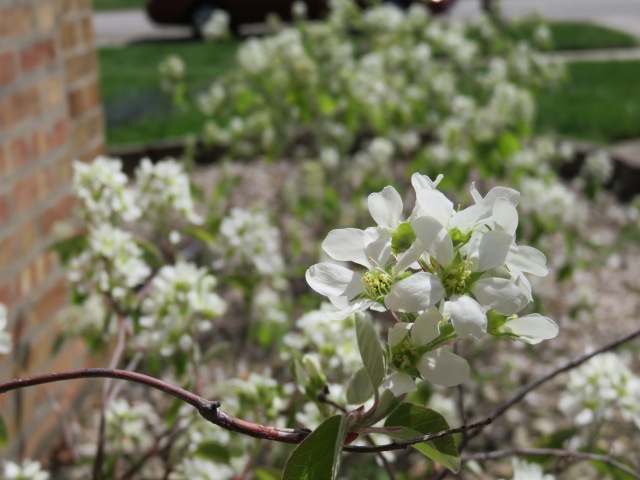 The three Regent Saskatoon serviceberry bushes, Amalanchier alnifolia ‘Regent’, are blooming now on the west side of the house.  When we planted them they had the shade of the silver maple, but now with that gone they get more sun, so we will need to water them now and then.  They are supposed to get no taller than six feet.

One day I looked out the kitchen window and saw a bunch of cow birds in the chinquapin oak, that is just barely beginning to leaf out.

Handsome male cow birds interested in something in the chinquapin oak tree.  Notice the bird in the bottom left.  Is it a female cow bird?  Or some other bird?

Here is another shot of that bird.  Since it was in the tree with the male cow birds I assumed it was a female cow bird.  They lay their eggs in other birds’ nest.  The eggs hatch early and tend to get more food from the foster mother bird than the smaller baby birds in the nest.

I got 21 heads of romaine lettuce planted in the garden last week along with a dozen kale and collard plants.  Organic vegetables are expensive to buy in the grocery store, so hopefully these will keep me supplied with greens for a while. 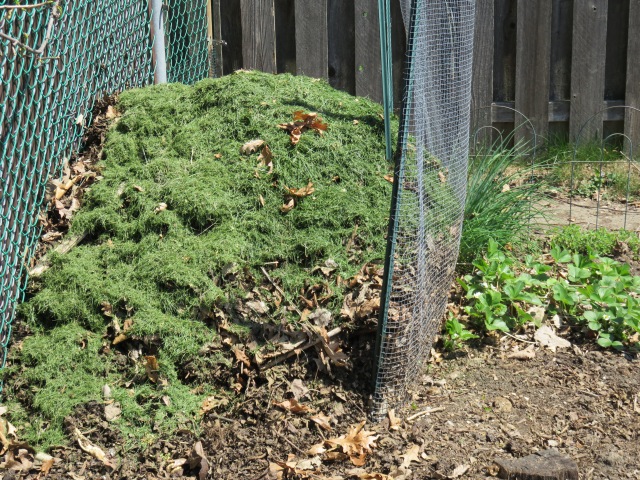 The grass is growing quickly.  After Dan mowed I swept up just the grass on the sidewalk and threw if on the compost pile, where Dan mixed it in to get the pile heated up.  To the right you can see strawberries starting to blossom.  I finally finished cleaning up all the strawberry patches and putting straw from last year’s ornamental grass under them.  It looks like we have a bumper crop of strawberries coming. 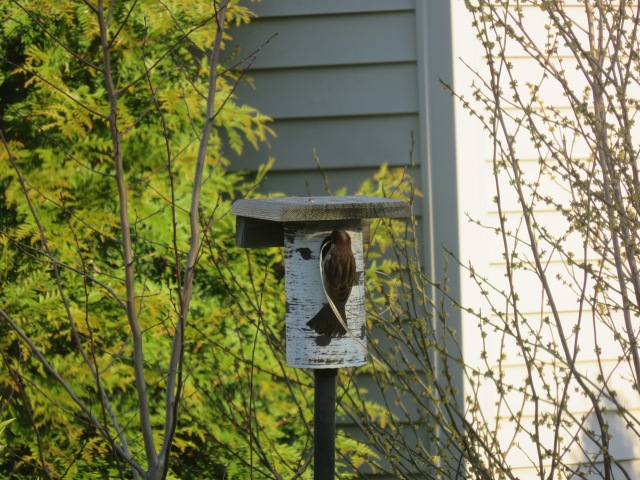 The house sparrows keep trying to build a nest in this bird house.  But this house is not for them….

Shagbark hickory at the end of the block starting to leaf out.  I am trying to bet better at identifying different native trees.

Spring Beauty Claytonia virginica.  These wildflowers are also blooming in the green space at the end of the block.

Forest Preserve Event:  Yesterday I went to the Palos Paddock area of the Forest Preserve for a special event that the Friends of the Forest Preserve put on.  They are looking for volunteers to help in the restoration of the forest.  Invasive plants, such as honeysuckle, have filled in the undergrowth and suppressed native plants.  We went on a walk in small groups and it was a fantastic time with like minded people as we identified plants, saw butterflies, and discussed conservation.  I would love to join them now and then and learn more about native plants, the forest, and how best to do restoration, though my schedule and garden keep me very busy.  But it was so much fun because they were a group of “my people” who love plants, nature, and being outdoors!

March was warm, but April has been cool.  We had snow this weekend.  Meanwhile it is time for spring bird migration and I was able to take a picture of a yellow-rumped warbler in the garden for the first time this past week.

It was almost sun-down when I caught this picture of a yellow-rumped warbler.  I got a lot of blurry pictures, too. 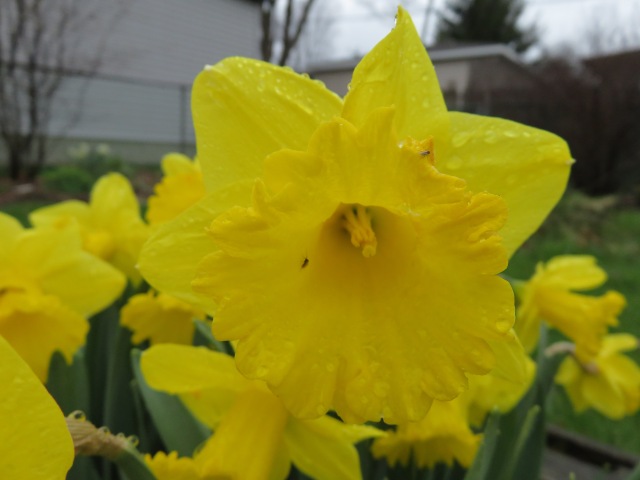 On a rainy day a few small insects seek shelter in the daffodil trumpet.

The different kinds of daffodils bloom at different times, so they keep in bloom for quite a long time. 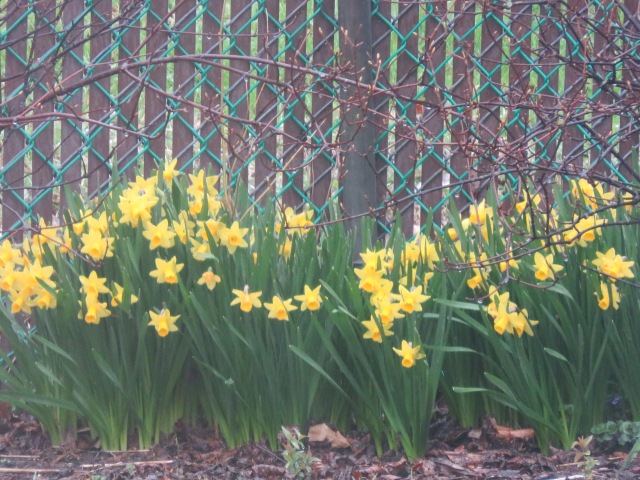 These mini daffodils would be wrapping up now, but the weather has been so cool that they continue to look great!

Just above the daffodils a dark-eyed junco pauses in the viburnum bushes. 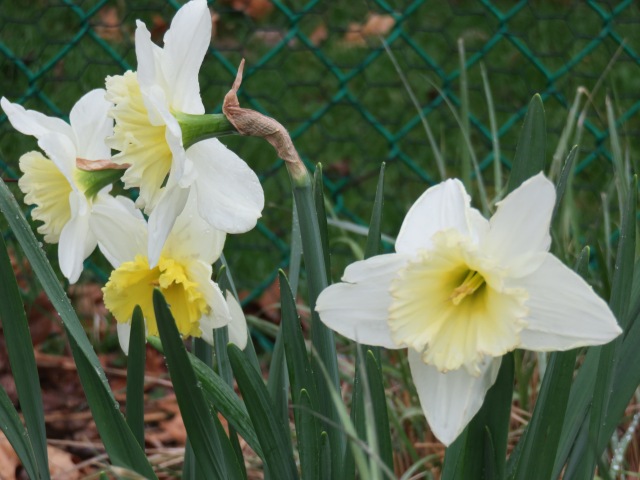 I love these white daffodils.

I believe this is a double daffodil – Ice King.  I am not that impressed, since they are so heavy they often hang down or get bent over by the snow or wind. 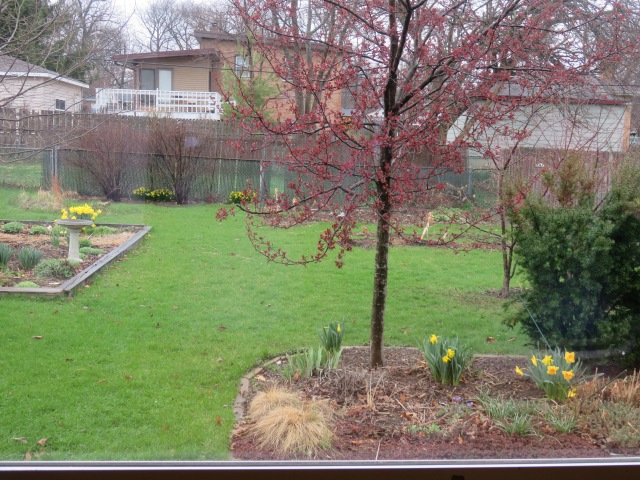 The robins are active now.  I have not pulled down the old collard stalks, though it seems clear that they are dead.  Behind them the rhubarb leaves are beginning to unfurl. 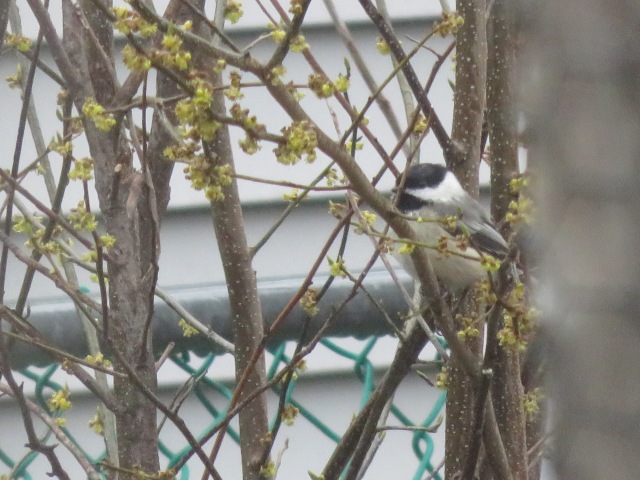 The spicebush is finishing up blooming now.  A black-capped chickadee was singing in the spicebush today.  The chickadees nested in the bluebird bird house last spring/summer, since bluebirds have stopped visiting. 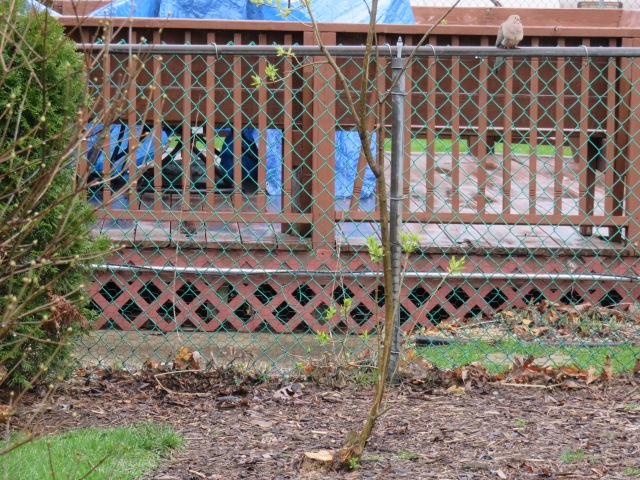 Our common lilac, which was huge, had a lot of dead branches.  We cut them all off except this one branch and a few shoots.  If it does not revive we will plant something else, but we are pretty lazy, so we will see if it revives on its own.  The mourning dove slipped into this picture, too.

A house finch in the sun yesterday.

I planted garlic bulbs last spring.  They died back last year and appeared again this spring.  On the internet it says:  “Harvest when the tops begin to yellow and fall over, before they are completely dry.”  This will probably be in July or August.  I should get some lettuce seeds planted soon.  I have some kale coming up that survived the winter.  In a few weeks it will be time to start planting hardy vegetables.